Veterans Chronicles is an hour-long program that tells the stories of America's greatest heroes in their own words.
Featuring interviews with eyewitnesses to the great, and tragic, moments in military history. From D-Day to Iwo Jima, Khe Sanh to the "Hanoi Hilton", Baghdad to Fallujah, the liberation of Grenada to the liberation of Afghanistan; Veterans Chronicles is history told from the perspective of those who were there. Included in each show are archival recordings, which take listeners back to a time when heroes were made. The program also includes short features, including "Heroes of the Air," "World War II Chronicles," and "Vox Pop."
The host of Veteran's Chronicles, Gene Pell, has spent much of the last half-century as an award winning broadcast journalist. He has been both Moscow Bureau Chief and Pentagon Correspondent for NBC News, and for twenty years was news anchor for the NBC affiliate in Boston. He is also former Director for Voice of America and President of Radio Free Europe/Radio Liberty. 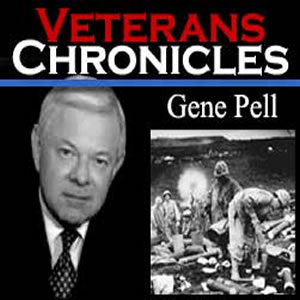 Army veteran of the 85th Regiment, 10th Mountain Division, Newcomb "Newc" Eldrege saw action as a ski trooper during World War II. His role in the Battle for Mount Belvedere would earn him the Purple Heart Award, in addition to two Bronze Stars. His experience as a skier as well as his training at Camp Hale in Colorado helped prepare him for contact with the enemy during the final assault of Italy.. . .