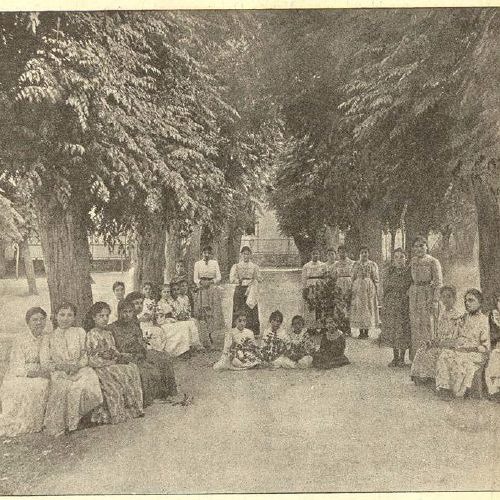 E230 | In this episode, Ellen Fleischmann and Christine Lindner discuss the history of women and gender and the American Protestant Mission in Lebanon. How did American missionary women experience and transform the American Protestant project in the Levant in the 19th and 20th centuries? How did American missionaries, both women and men, interact with women from Beirut and Mt. Lebanon, both those who converted and those who did not? And how did these heterogeneous interactions produce new experiences of womanhood, family, power, and authority in the Levant? Drs. Fleischmann and Lindner reflect on these questions based on their considerable research in Lebanon and elsewhere, and also share their thoughts about sources and strategies for tracing women's history and missionary history in the Ottoman and post-Ottoman Levant. http://www.ottomanhistorypodcast.com/2016/03/women-missionaries-lebanon.html Ellen Fleischmann is Professor of History and Humanities Chair at the University of Dayton in Dayton, Ohio. She is the author of The Nation and Its 'New' Women: the Palestinian Women's Movement, 1920-1948 (2003) as well as numerous articles. Christine Lindner served as the inaugural director of the Preserving Protestant Heritage in the Middle East project at the Near East School of Theology in Beirut, Lebanon. She obtained her Ph.D. from the University of Edinburgh in 2009 and has published a number of articles on the history of Protestantism in Ottoman Syria. Susanna Ferguson is a Ph.D. Candidate in Middle Eastern History at Columbia University. She is currently working on a dissertation entitled "Tracing Tarbiya: Women, Gender and Childrearing in Egypt and Lebanon, 1865-1939." CREDITS Episode No. 230 Release Date: 12 March 2016 Recording Location: American University in Beirut, Lebanon Audio editing by Onur Engin (funded by a paid assistantship at Koç University under the supervision of Nina Ergin) Production by Chris Gratien Sound excerpts from archive.org: Recep Birgit - Olmaz ilac sine-i sad-pareme; Filiz Şatıroğlu - Safvet-i askim bilip ey gul-tenim Image courtesy of Christine Lindner, The Playground-Beirut Seminary for Girls,” The Church at Home and Abroad 18:12 (December 1894), 493.. . .