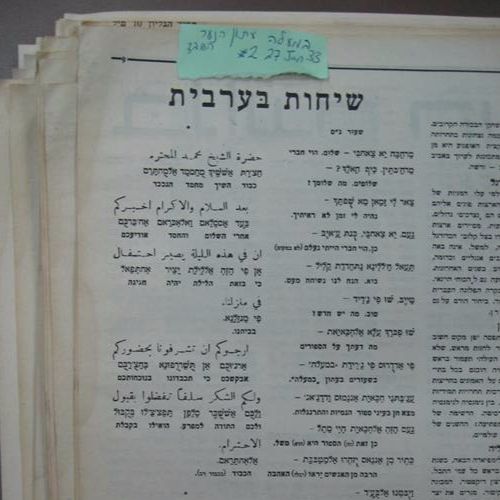 E235 | The linguistic landscape of Mandate Palestine was highly complex. Arabic and other languages of the former Ottoman Empire were joined by the wide array of tongues spoken by Jewish immigrants as well as English, the language of Palestine's new British governors. As our guest Liora Halperin demonstrates in her book Babel in Zion (Yale University Press), this linguistic diversity appeared to be an existential threat to those within the Zionist movement who hoped to see Jewish community of Mandate Palestine united by a newly-revived Hebrew language. Yet linguistic pluralism was not seen as a threat by all, and other camps championed other agendas through language politics. In this episode, we discuss Dr. Halperin's research concerning language politics and the legacy of Mandate Palestine's period of linguistic pluralism. Liora R. Halperin is an Assistant Professor of History and Jewish Studies and the Endowed Professor of Israel/Palestine Studies at the University of Colorado Boulder. She received her M.A. and Ph.D. in History from UCLA in 2011 and her B.A from Harvard. Her research focuses on Jewish cultural history, Jewish-Arab relations in Ottoman and Mandate Palestine, language ideology and policy, and the politics surrounding nation formation in Palestine in the years leading up to the creation of the State of Israel in 1948. Chris Gratien holds a Ph.D. from Georgetown University's Department of History. His research focuses on the social and environmental history of the Ottoman Empire and the modern Middle East. He is currently preparing a monograph about the environmental history of the Cilicia region from the 1850s until the 1950s. Erin Hutchinson is a PhD candidate in History at Harvard University focusing on the social and cultural history of the Soviet Union after the death of Stalin. Her dissertation project explores how intellectuals of rural origins, especially those from Moldova, Russia, Ukraine, and Armenia, sought to transform cultural understandings of the nation in the second half of the twentieth century. Polina Ivanova is a Ph.D. Candidate at Harvard University and a 2016-18 Tyler Fellow at Dumbarton Oaks Research Library and Collection. Her interests include history of the medieval Mediterranean, Anatolia and Iran, as well as archaeology and material culture studies. CREDITS Episode No. 235 Release Date: 3 April 2016 Recording Location: Cambridge, MA Editing and production by Chris Gratien Musical excerpts from archive.org uploaded by fidika: Egil Daglar Ustunden Asam - Viktoriya Hanim; Istanbul'dan Ayva Gelir Nar Gelir - Azize Tozem and Sari Recep; Harmandali - Recep Efendi, Cemal Efendi Images and bibliography courtesy of Liora Halperin Images and bibliography at http://www.ottomanhistorypodcast.com/2016/04/language-palestine.html. . .