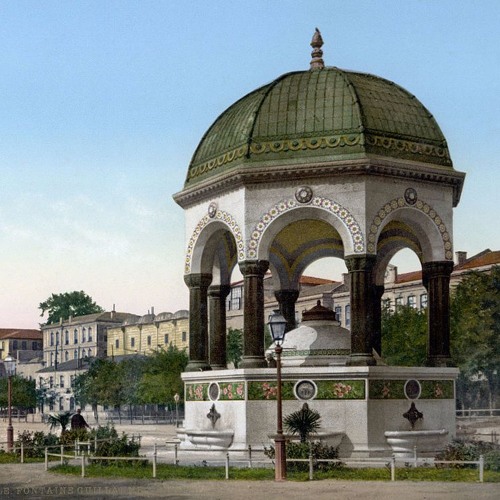 E246 | The fountain standing in the Hippodrome (At Meydanı) in Istanbul, located just a few steps away from some of Turkey’s most famous tourist attractions like Hagia Sophia and the Blue Mosque, doesn’t attract much notice these days. But wrapped up in this monument, gifted to the people of the city by the German Emperor Wilhelm II, is a story that sheds some light on the bilateral relations between the Ottoman Empire and their European neighbors before WWI. What is the role that the arts play in this diplomatic relationship? Under what conditions could such an object be inserted in the topography of Istanbul’s historic monuments? In this episode, Emily Neumeier and Sotirios Dimitriadis speak with Lorenz Korn about his research on the imperial fountain, tracing the process of its design, construction and reception. This episode is part of an ongoing series entitled "The Visual Past." Images and more at: http://www.ottomanhistorypodcast.com/2016/07/german-fountain.html Lorenz Korn is an art historian and archaeologist of the Islamic world. Since 2003, he has served as full professor of Islamic Art and Archaeology at the University of Bamberg. His research focuses on the architecture of the central Islamic lands between the 10th and 16th centuries, Islamic minor arts such as metalwork, and Arabic epigraphy. His recent publications include articles and books on the architecture of the mosque and on artistic exchange between Europe and the Islamic World. Emily Neumeier is a doctoral candidate in the Department of Art History at University of Pennsylvania. Her research concerns the art and architecture of the Ottoman Empire and Turkish Republic. She is currently preparing a thesis on the architectural patronage of provincial notables in Ottoman Greece and Albania. Emily is also editor of stambouline, a site where travel and the Ottoman world meet. Sotirios Dimitriadis is a historian of the late Ottoman Empire, whose research focuses on issues of urban and social history. He completed his doctoral dissertation in the School of Oriental and African Studies, at the University of London, and is currently teaching at the International Hellenic University. CREDITS Episode No. 246 Release Date: 8 July 2016 Recording Location: University of Bamberg Editing and production by Chris Gratien Sound excerpts: Istanbul'dan Ayva Gelir Nar Gelir - Azize Tozem and Sari Recep; Harmandali - Recep Efendi, Cemal Efendi Special thanks to Muhtelif for allowing us to use "Bint El Shalabiya" in the outro music Images and bibliography courtesy of Lorenz Korn available at: http://www.ottomanhistorypodcast.com/2016/07/german-fountain.html. . .