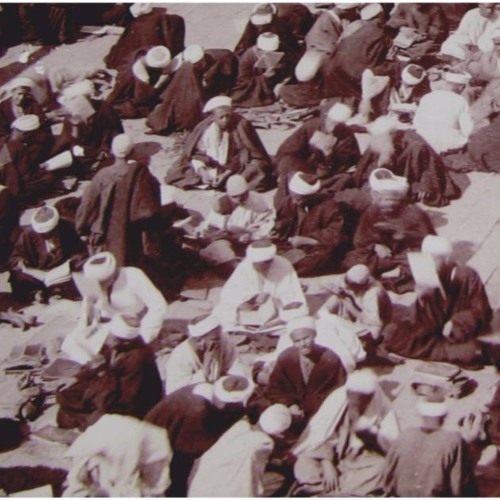 A New History of Print in Ottoman Cairo | Kathryn Schwartz

E249 | We often regard print as a motor of social change, leaving revolutions in its wake, whether political and religious. For historians of the Middle East, this line of thought always leads to the (predictable) question: why didn’t Muslims or Ottomans or Arabs adopt print? In this episode, Kathryn Schwartz discusses why this question is often poorly posed and then delves into an in-depth look at how and why people used print in one particular historical context—nineteenth-century Cairo. Touching upon topics such Napoleon, Mehmed Ali, and the Bulaq press, we explore how print slowly and haphazardly embedded itself into various aspects of Egyptian learned life. This fresh history casts nineteenth-century Egypt in a new light by examining the technological adaptation of print not as an act of unstoppable and transformative modernity, but as a slow and incremental expansion of already existing practices of book production. More at http://www.ottomanhistorypodcast.com/2016/07/print-cairo.html Kathryn Schwartz is an Arabist and historian of the modern Middle East. She is currently the Postdoctoral Fellow for the Digital Library of the Eastern Mediterranean at Harvard. Kathryn earned her Ph.D. in History and Middle Eastern Studies from Harvard in 2015, and her B.A. in Arabic and Middle Eastern Studies from King’s College, the University of Cambridge in 2008. She is currently revising her dissertation into a book entitled "Print and the People of Cairo, 19th century." Nir Shafir is a historian of the Middle East whose research examines the intersections of knowledge production, religious practice, and material culture in the early modern world (1400-1800). He curates Ottoman History Podcast’s series on history of science in addition to being one of the co-founders of hazine.info, a website that explores the archives and libraries of the Islamic world. He is currently Assistant Professor of History at the University of California, San Diego. CREDITS Episode No. 249 Release Date: 15 July 2016 Recording Location: Cambridge, MA Editing and production by Chris Gratien Sound excerpts: Baglamamin Dugumu - Necmiye Ararat and Muzaffer; Egil Daglar Ustunden Asam - Viktoriya Hanim; Harmandali - Recep Efendi, Cemal Efendi Special thanks to Kara Güneş for allowing us to use the composition "Istanbul" in the intro music Images and bibliography courtesy of Kathryn Schwartz available at http://www.ottomanhistorypodcast.com/2016/07/print-cairo.html. . .