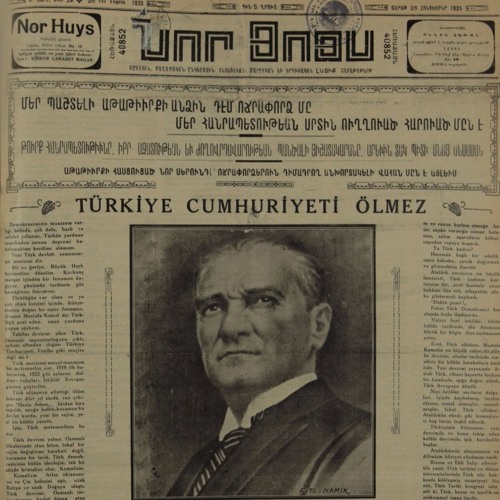 E256 | After facing the destruction of their community during the First World War, former Ottoman Armenians set about rebuilding in Turkey first during a period of relative optimism under the Allied occupation of Istanbul and later as non-Muslim citizens of new Turkish nation-state. In her new work entitled Recovering Armenia, Lerna Ekmekçioğlu explores the changes and continuities in the identity of Istanbul's Armenian community during this transformative period. In this interview, we explore Armenian collective politics, feminist movements, and expressions of loyalty through the Armenian press and through the writings of women in particular, and we examine the issue of Armenian belonging in Turkey through the lens of "secular dimmitude" among non-Muslim citizens of a predominantly Muslim but secular republic. More at http://www.ottomanhistorypodcast.com/2016/07/armenians-early-republican-turkey.html Lerna Ekmekçioğlu is McMillan-Stewart Associated Professor of History at Massachusetts Institute of Technology. She works on Armenian and Ottoman/Turkish history, including women’s history. Chris Gratien holds a Ph.D. from Georgetown University's Department of History. His research focuses on the social and environmental history of the Ottoman Empire and the modern Middle East. He is currently preparing a monograph about the environmental history of the Cilicia region from the 1850s until the 1950s. Nir Shafir is a historian of the Middle East whose research examines the intersections of knowledge production, religious practice, and material culture in the early modern world (1400-1800). He curates Ottoman History Podcast’s series on history of science in addition to being one of the co-founders of hazine.info, a website that explores the archives and libraries of the Islamic world. He is currently an advanced doctoral candidate in the History Department at UCLA. Eda Çakmakçı is a PhD student in the Anthropology and Middle Eastern Studies Program at Harvard University. Her research focuses on the politics of nature in Turkey. CREDITS Episode No. 256 Release Date: 6 August 2016 Recording Location: Massachusetts Institute of Technology Editing and production by Chris Gratien Sound excerpts: Urakh Ler - Mari Pozapalian; Egil Daglar Ustunden Asam - Viktoriya Hanim; Harmandali - Recep Efendi, Cemal Efendi; Murat Kenarinda - Agyazar Efendi Images and bibliography courtesy of Lerna Ekmekçioğlu available at http://www.ottomanhistorypodcast.com/2016/07/armenians-early-republican-turkey.html. . .