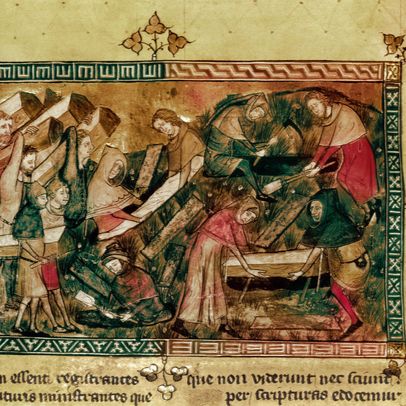 E270 | Genomic research is resolving old questions about the history of plague, revealing, for example, that the Black Death was caused by the same species of plague that exists today and demonstrating the complex ways in which plague moved throughout the medieval and early modern world. Yet even as scientific methods today shed light on the history of plague, past understandings and depictions of disease remain both highly relevant and ignored. In this episode, we chat with Lori Jones about early modern European views of plague and explore the relationship between disease, landscape, and geography within the European imagination. We talk about the origins of environmental understandings of disease and how plague became increasingly associated with eastern and southern locales such as the Ottoman Empire and Southern Europe. We also have a separate conversation (beginning at 32:30) about the misuse of medieval images concerning disease and medicine in the 21st century as digital media facilitate both the spread and disembodiment of historical images. More at http://www.ottomanhistorypodcast.com/2016/09/disease-landscape-europe.html Lori Jones is a PhD Candidate in the University of Ottawa's Department of History. Her research focuses on how written portrayals of the geographical and historical origins of the plague evolved across the late medieval to early modern periods. Chris Gratien holds a Ph.D. from Georgetown University's Department of History. His research focuses on the social and environmental history of the Ottoman Empire and the modern Middle East. He is currently preparing a monograph about the environmental history of the Cilicia region from the 1850s until the 1950s. Nir Shafir is a historian of the Middle East whose research examines the intersections of knowledge production, religious practice, and material culture in the early modern world (1400-1800). He curates Ottoman History Podcast’s series on history of science in addition to being one of the co-founders of hazine.info, a website that explores the archives and libraries of the Islamic world. He is currently an advanced doctoral candidate in the History Department at UCLA. Andreas Guidi is a Ph.D. candidate at the Humboldt University in Berlin and at the EHESS in Paris researching on networks, generations, and capital transmission in late and post-Ottoman Rhodes. He is also the creator of the Southeast Passage podcast. CREDITS Episode No. 270 Release Date: 19 September 2016 Recording Location: Paris, France Editing and production by Chris Gratien Sound excerpts: Katibim (Uskudar'a Gider iken) - Safiye Ayla; Baglamamin Dugumu - Necmiye Ararat and Muzaffer; Harmandali - Recep Efendi, Cemal Efendi Special thanks to Kara Güneş for allowing us to use the composition "Istanbul" in the intro and outro music SoundCloud image: The burial of plague victims in Tournai (Detail of a miniature from “The Chronicles of Gilles Li Muisis” (1272-1352), abbot of the monastery of St. Martin of the Righteous. Bibliothèque royale de Belgique, MS 13076-77, f. 24v) Images and bibliography courtesy of Lori Jones available at http://www.ottomanhistorypodcast.com/2016/09/disease-landscape-europe.html. . .