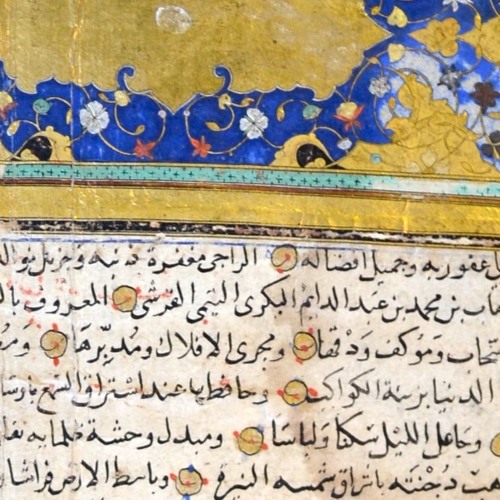 E282 | Classical encyclopedias and compendia such as Pliny’s Natural History have long been known to Western audiences, but the considerably more recent works of medieval Islamic scholars have been comparatively ignored. In this episode, we talk to Elias Muhanna about his new translation of a fourteenth-century Arabic compendium by Egyptian scholar Shihab al-Din al-Nuwayri, which covers everything from astrological and natural phenomena to religion, politics, food, animals, sex, and of course history. Al-Nuwayri’s compendium, entitled The Ultimate Ambition in the Arts of Erudition (Nihayat al-arab fi funun al-adab), is rare glimpse into not only the worldview of a 14th century scholar but also the centuries of texts and learning available to the literati of the Mamluk Empire and the medieval Islamicate world. More at http://www.ottomanhistorypodcast.com/2016/11/medieval-islamic-encyclopedia.html Elias Muhanna is the Manning Assistant Professor of Comparative Literature at Brown University. He is a scholar of classical Arabic literature and Islamic intellectual history. Chris Gratien holds a Ph.D. from Georgetown University's Department of History and is currently an Academy Scholar at the Harvard Academy for International and Area Studies. His research focuses on the social and environmental history of the Ottoman Empire and the modern Middle East. He is currently preparing a monograph about the environmental history of the Cilicia region from the 1850s until the 1950s. Zoe Griffith is a doctoral candidate in History at Brown University working on political economy and governance in Egypt and the Ottoman Mediterranean. Zoe is a co-curator of the OHP series on legal history in the Ottoman Empire and Islamic world. Nora Lessersohn is a Ph.D. student in History and Middle Eastern Studies at Harvard University. Her work focuses on Ottoman Armenians in Anatolia, Istanbul, and the United States during the 19th and 20th centuries. CREDITS Episode No. 282 Release Date: 16 November 2016 Recording Location: Brown University Editing and production by Chris Gratien Sound excerpts: from archive.org - Baglamamin Dugumu - Necmiye Ararat and Muzaffer; Katibim (Uskudar'a Gider iken) - Safiye Ayla Special thanks to Kara Güneş for allowing us to use the composition "Istanbul" in the intro music Additional music recordings of Charbel Rouhana (oud) and Samir Siblini (nay), July 2003, courtesy of Elias Muhanna Bibliography courtesy of Elias Muhanna available at http://www.ottomanhistorypodcast.com/2016/11/medieval-islamic-encyclopedia.html. . .