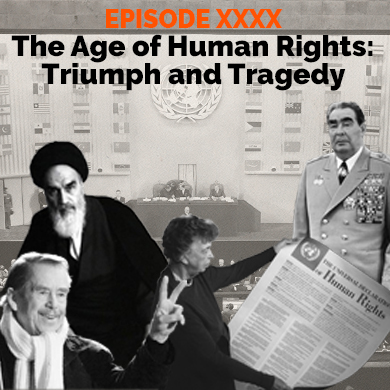 Episode 40 - The Age of Human Rights: Tragedy and Triumph

In 2014, Saudi Arabian blogger Raif Badawi was sentenced to 10 years in prison and 1,000 lashes for insulting Islam by promoting secular values on his blog Free Saudi Liberals. Raif Badawi’s fate would have been familiar to Soviet refusenik and human rights activist Natan Sharansky, and many other dissidents in the Soviet Bloc, who also faced long prison sentences and inhuman treatment during the Cold War. Both theocratic and communist states proclaim to be in possession of the “truth.” Consequently, they punish those who engage in religious or ideological heresy, leaving little room for the idea of human rights. So, it is no surprise that in 1948, Saudi Arabia and six European Communist states were among the eight countries that did not vote in favor of the United Nations Universal Declaration of Human Rights. Both communist and Islamic states developed cautious strategies to engage with the growing human rights system in order to seek legitimacy without undermining their grip on power. One key strategy was to pull the teeth from the protection of free expression by including simultaneous obligations to prohibit the broadly defined concept of “incitement to hatred.” But ultimately the very human rights language which the communist states had sought to contain ended up eroding the communist stranglehold on power. But the repressive legacy of Communism had a long half-life, even after the ideology itself was dumped on the ash heap of history at the end of the Cold War. The countries in the Organization of Islamic Cooperation — the OIC — sought to exploit the very loopholes that the communist states had introduced for their own purposes. Instead of protecting an atheistic and materialistic ideology, they advanced an interpretation of human rights where restrictions on free speech protected theistic and metaphysical Islamic doctrines from criticism and satire. And while a concerted global effort by democracies successfully beat back the OIC offensive at the UN, this conflict is still ongoing. In fact, the democracies and human rights system of Western Europe have internalized and expanded limitations on free speech, which they once deemed dangerous. This raises the question of just how robust the future of free speech — and the culture on which it depends — really is. In this episode we will explore: How the Communist East and the Capitalist West clashed over the limits of free speech when drafting the Universal Declaration of Human Rights and the International Covenant on Civil and Political Rights at the UN; How Eleanor Roosevelt became a dogged and eloquent defender of principled free speech protections and warned against Soviet attempts to abuse hate speech restrictions to punish all dissent; How the American position at the UN clashed with domestic laws targeting communists under the Second Red Scare and McCarthyism; How the Soviet Bloc used laws against “incitement” to punish hundreds of dissidents and human rights activists behind the Iron Curtain; How the Helsinki Final Act provided dissidents with a tool to hold their governments morally accountable for human rights violations; How Western states and human rights NGOs gave dissidents like Vaclav Havel and Andrei Sakharov a voice and increased the pressure on the Soviet Bloc; How the Helsinki Final Act contributed to the fall of Communism; How, after the end of the Cold War, the OIC launched a campaign to prohibit “defamation of religions” at the UN; How the OIC campaign managed to secure majorities at the UN and conflate blasphemy and hate speech; How the OIC campaign was defeated by the Obama administration and the application of the Supreme Court decision in Brandenburg v. Ohio; and How case law from the European Court of Human Rights undermines efforts to prevent future abuse of human rights to limit freedom of expression. Why have kings, emperors, and governments killed and imprisoned people to shut them up? And why have countless people risked death and imprisonment to express their beliefs? Jacob Mchangama guides you through the history of free speech from the trial of Socrates to the Great Firewall. You can subscribe and listen to Clear and Present Danger on Apple Podcasts, Google Play, YouTube, TuneIn, and Stitcher, or download episodes directly from SoundCloud. Stay up to date with Clear and Present Danger on the show’s Facebook and Twitter pages. Email us feedback at freespeechhistory@gmail.com.. . .