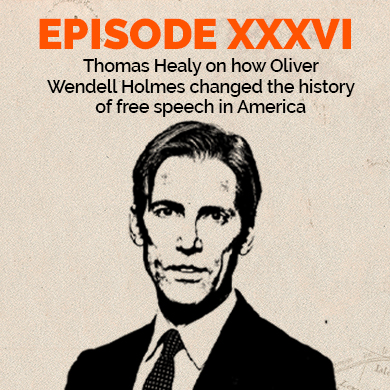 On March 4, 1801, Thomas Jefferson, the newly elected president, gave his first inaugural address. Jefferson eloquently dismissed the logic behind the Sedition Act of 1798, which had sent Republican critics of then-Federalist President John Adams to prison: We are all republicans: we are all federalists. If there be any among us who would wish to dissolve this Union, or to change its republican form, let them stand undisturbed as monuments of the safety with which error of opinion may be tolerated, where reason is left free to combat it. Based on this strong commitment to a robust protection of free speech, one might have expected the First Amendment to play a key role in entrenching the Jeffersonian vision of free expression. But instead, it became an almost dead letter for more than a century until revived by an iconic but unlikely champion of the First Amendment: Supreme Court Justice Oliver Wendell Holmes. In this conversation, professor Thomas Healy explains how Wendell Holmes changed his mind on free speech and laid the foundation for the current strong legal protection of the First Amendment. Thomas Healy is a professor of law at Seton Hall University School of Law and the author of the award-winning book “The Great Dissent: How Oliver Wendell Holmes Changed His Mind--And Changed the History of Free Speech in America”. The conversation will explore: Why the First Amendment remained a dead letter in 19th century America. How Oliver Wendell Holmes’ background shaped his opinions and outlook. How Oliver Wendell Holmes long upheld a “Blackstonian” conception of free speech protecting only against prior restraints on, not subsequent punishments of, speech. How the Blackstonian conception of free speech permitted the federal and local governments to restrict and punish everything from peaceful public protests, obscenity, and political speech of “bad tendency.” How the Espionage Act of 1917 and the Sedition Act of 1918 led to dramatic restrictions of political speech and indictments of thousands of activists protesting American participation in World War I. The remarkable development in Wendell Holmes’ conception of the First Amendment, from his opinion upholding conviction in the 1919 case of Schenck v. United States to his famous dissenting opinion in Abrams v. United States. How a number of young scholars like Learned Hand, Harold Laski, Zechariah Chafee, and Felix Frankfurter were instrumental in changing Wendell Holmes’ mind on the limits of free speech. How Oliver Wendell Holmes introduced the clear and present danger test, which would become an important test under First Amendment law over the coming decades. Whether Wendell Holmes’ legacy will endure in the 21st century, and would he even want it to in the digital age? Why have kings, emperors, and governments killed and imprisoned people to shut them up? And why have countless people risked death and imprisonment to express their beliefs? Jacob Mchangama guides you through the history of free speech from the trial of Socrates to the Great Firewall. You can subscribe and listen to Clear and Present Danger on Apple Podcasts, Google Play, YouTube, TuneIn, and Stitcher, or download episodes directly from SoundCloud. Stay up to date with Clear and Present Danger on the show’s Facebook and Twitter pages, or visit the podcast’s website at freespeechhistory.com. Email us feedback at freespeechhistory@gmail.com.. . .