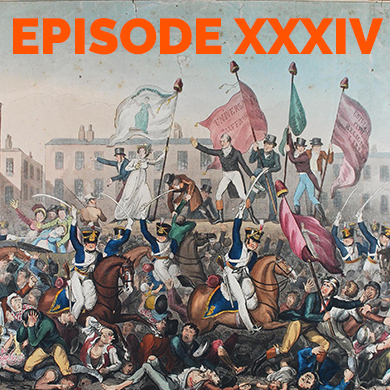 Episode 34 – The Age of Reaction: The fall and rise of free speech in 19th century Europe

The 18th century ended with free speech in full retreat. With the French Revolution, the call for “Enlightenment Now!” was no longer seen as the harbinger of humanity’s inevitable march toward progress. It had become synonymous with radical forces of destruction drowning monarchy, tradition, and religion in the blood of kings, aristocrats, and nuns. With the defeat of Napoleon in 1814, conservatives and monarchs were firmly back in power — and they had no intention of letting go. Never again were those rulers who put down wild-eyed revolutionaries like mad dogs going to allow radicals to seduce the people with lofty principles and propaganda. In order to rebuild a stabile Europe with respect for authority and tradition, freedom of speech had to be reined in. Even in supposedly liberal Britain, William Pitt’s anti-revolutionary “reign of terror” of the 1790s was revived and intensified in the 1810s and 20s. In this episode, we see how European rulers weaved an intricate web of censorship and repression across the continent. We will see: How the Congress of Vienna entrenched an authoritarian and traditionalist political order in Europe after the battle of Waterloo How the Carlsbad Decrees centralized preventive censorship and limited academic freedom across the German Confederation How German writers like Heinrich Heine and Karl Marx fought an uphill battle against censorship and repression How European censorship was driven by a fear of the increasingly literate masses How the British government used the crimes of seditious and blasphemous libel to harass and intimidate political radicals and reformers How the Peterloo Massacre of workers in Manchester radicalized opposition to the Tory government and intensified the calls for reform How the radical publisher Richard Carlile spent 10 years in prison for selling deist and republican publications, including Tom Paine’s “Age of Reason” How Carlile and his workers ultimately defeated the government with a constant stream of “seditious” and “blasphemous” publications, despite being imprisoned and harassed How James and John Stuart Mill contributed to expanding the British tolerance of controversial religious and political ideas as the 19th century progressed How the French Revolutions of 1830 and 1848 led to brief periods of liberal euphoria and the collapse of censorship across Europe, only to be crushed by counter-revolutionary forces How the Iron Chancellor Otto Von Bismarck used a national emergency to crush socialist and social democratic newspapers and publications in the second half of the 19th century How the idea of press freedom and the mechanization of the printing press made pre-publication censorship impossible for most governments How press freedom regained its momentum at the end of the 19th century Why have kings, emperors, and governments killed and imprisoned people to shut them up? And why have countless people risked death and imprisonment to express their beliefs? Jacob Mchangama guides you through the history of free speech from the trial of Socrates to the Great Firewall. You can subscribe and listen to Clear and Present Danger on Apple Podcasts, Google Play, YouTube, TuneIn, and Stitcher, or download episodes directly from SoundCloud. Stay up to date with Clear and Present Danger on the show’s Facebook and Twitter pages, or visit the podcast’s website at freespeechhistory.com. Email us feedback at freespeechhistory@gmail.com.. . .