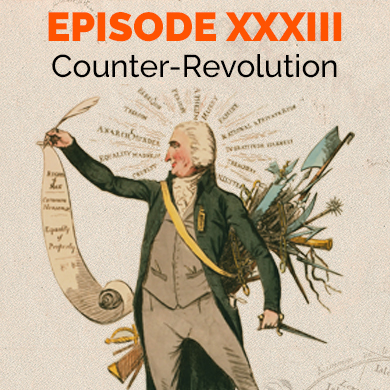 Faced with bloody terrorism democratic Europe has often reacted with tough measures. The UK Counter-Terrorism and Border Security Act of 2019 criminalizes expressing an opinion that is “supportive” of a proscribed organization if done in a way that is “reckless” as to whether it encourages support of terrorism. This makes it rather unnerving to jump into, for example, a Twitter thread on the age-old discussion of whether various groups are terrorists or freedom fighters. In this episode we’ll see how governments in the late 18th century reacted to a different kind of terror: the spread of revolutionary ideas and practice that shook the established order to the ground, including the actual Terror unleashed after the French Revolution spiraled out of control. Dutch “Patriots” took their cue from the American Revolution, using freedom of speech and hard-hitting newspapers to hammer away at the Stadtholder regime. How would the supposedly liberal and tolerant Dutch react when revolutionary ideas hit fever pitch in the 1780s. In Britain, a pamphlet war between Edmund Burke and Thomas Paine unleashed an unprecedented discussion of first principles that energized the lower classes and frightened the government. Could Britain maintain the delicate balance between order and liberty while holding at bay both revolutionary ideas and armies of France? In this episode, we will discuss: How the Dutch “Patriot” movement used free speech and partisan newspapers to press for democratic reform and tolerance How the pamphlet “To the People of the Netherlands” became a rallying cry of the Patriot side How the Stadtholder regime used repression and ultimately foreign invasion to silence the Patriots, How the French Revolution briefly brought free speech and democracy back with the establishment of the Batavian Republic How Burkes “Reflections on the Revolution in France” unleashed a British pamphlet war for and against the principles of the French Revolution How Thomas Paine´s reply to Burke - “Rights of Man” - became the world's highest selling book and spread the idea of democratic reform to the masses How Prime Minister William Pitt responded by increasing repression of freedom of speech and assembly How the “Royal Proclamation Against Seditious Writings and Publications” unleashed a witch hunt for members of the democratic reform movement How Tom Paine became an enemy of the state, under constant surveillance, convicted of seditious libel and burned in effigy in towns all over Britain Why have kings, emperors, and governments killed and imprisoned people to shut them up? And why have countless people risked death and imprisonment to express their beliefs? Jacob Mchangama guides you through the history of free speech from the trial of Socrates to the Great Firewall. You can subscribe and listen to Clear and Present Danger on Apple Podcasts, Google Play, YouTube, TuneIn, and Stitcher, or download episodes directly from SoundCloud. Stay up to date with Clear and Present Danger on the show’s Facebook and Twitter pages, or visit the podcast’s website at freespeechhistory.com. Email us feedback at freespeechhistory@gmail.com.. . .