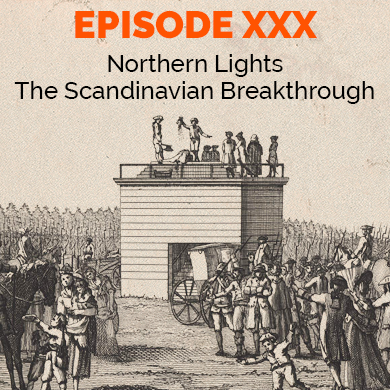 In the 1760s and 1770s, Sweden and Denmark-Norway shortly became the epicenter of press freedom protections in Enlightenment Europe. In 1766, the Swedish Diet passed the Press Freedom Act, making Sweden the first country in the world to provide constitutional protection to both the principles of press freedom and freedom of information. In 1770, Denmark-Norway, under the de-facto rule of German physician Johan Friedrich Struensee, became the first country in the world to abolish any and all restrictions on press freedom. Almost overnight, both Sweden and Denmark-Norway experienced a new vibrant public sphere with debate, discussion and trolling. But in 1772, King Gustav III ended Sweden’s so-called Age of Liberty — and with it, the era of the liberal press. That same year, Struensee lost not only his power, but his hands, legs — and head — as he was dismembered and ousted in a coup that severely restricted press freedom. But how did Sweden and Denmark-Norway become trailblazers of press freedom, if only for the briefest of time? Find out in this episode where we explore: How Sweden’s Age of Liberty introduced parliamentarism but kept freedom of speech suppressed by censorship How writers like Peter Forsskål and Anders Nordencrantz argued for press freedom inspired by Enlightenment ideals How Peter Forsskål’s “Thoughts on Civil Liberty” was banned but still inspired a new generation of Swedish politicians How the MP and priest Anders Chydenius paved the way for the Press Freedom Act in the Swedish Parliament How Struensee became the man behind the throne of the mentally ill King Christian VII How Struensee tried to usher in Enlightenment Now! with 1800 orders and edicts in 16 months How Struensee eliminated two centuries of censorship with the stroke of a pen How Struensee’s tsunami of Enlightenment reforms and sexual liberation came back to haunt him in critical pamphlets and newspapers How Struensee had to compromise his free speech ideals in 1771 How Struensee was ousted and executed by disgruntled nobles who ended his free speech experimentation and cracked down on dissent Why critical writings about herring fishery should never be allowed Why have kings, emperors, and governments killed and imprisoned people to shut them up? And why have countless people risked death and imprisonment to express their beliefs? Jacob Mchangama guides you through the history of free speech from the trial of Socrates to the Great Firewall. You can subscribe and listen to Clear and Present Danger on Apple Podcasts, Google Play, YouTube, TuneIn, and Stitcher, or download episodes directly from SoundCloud. Stay up to date with Clear and Present Danger on the show’s Facebook and Twitter pages, or visit the podcast’s website at freespeechhistory.com. Email us feedback at freespeechhistory@gmail.com.. . .