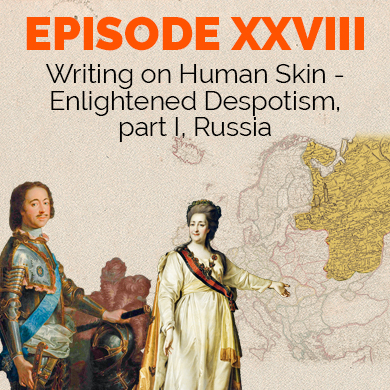 The Enlightenment´s emphasis on science, progress, tolerance and rationality not only attracted philosophers. Even absolute monarchs dreamt of “Enlightenment Now.” But how do you combine enlightenment without undermining the traditions and ideas that legitimate absolute rule in the first place? Fortunately for Europe´s modernizing rulers, some of Europe´s most prominent 18th century philosophes – including Voltaire - stood ready to praise and legitimize the new winds of “enlightened despotism” that took hold in places like Russia and Prussia. In this episode, we cover the ground zero of enlightened despotism: Russia. A country whose Tsar Peter the Great, according to Voltaire, single-handedly dragged across both time and place from the Dark Ages and Asia into the 18th century and Europe. Among the topics tackled are: How the benefits of modern science, learning and the fresh air of religious tolerance attracted Peter the Great. How Peter the Great believed in “move fast and break tradition” and combined enlightenment reforms with ruthless suppression How Peter kicked off his modernizing reform with a fashion statement ordering men to shave their beards and women to dress like Parisians How Peter´s reforms planted the seed for more liberal Enlightenment reforms How Catherine the Great, introduced the idea and principle of freedom of speech into Russia´s deeply traditional culture How Catherine modelled her “Great Instruction” on the ideas of Montesquieu and Beccaria and corresponded with thinkers like Voltaire, Diderot, and D´Alembert. How Catherine reversed her course and tightened censorship How the French Revolution caused Catherine to crack down on radical Russian writers like Alexander Radischev and Nikolay Novikov How Alexander Radischev used relied on “freedom of the press as the great bulwark of liberty” to write the most radical and robust defense of free speech in Russian history. Why have kings, emperors, and governments killed and imprisoned people to shut them up? And why have countless people risked death and imprisonment to express their beliefs? Jacob Mchangama guides you through the history of free speech from the trial of Socrates to the Great Firewall. You can subscribe and listen to Clear and Present Danger on Apple Podcasts, Google Play, YouTube, TuneIn, and Stitcher, or download episodes directly from SoundCloud. Stay up to date with Clear and Present Danger on the show’s Facebook and Twitter pages, or visit the podcast’s website at freespeechhistory.com. Email us feedback at freespeechhistory@gmail.com.. . .