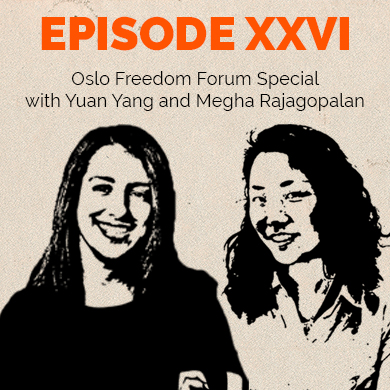 June 4th, 2019 marks the 30th anniversary of the bloody culmination of the Chinese government´s Tiananmen Massacre of pro-democracy students and activists. But all public discussion and memories of the massacre have been erased within China itself. In our second episode from the Oslo Freedom Forum we will take a trip behind the Great Firewall into modern day China where the most ambitious and sophisticated attempt to control the flow and content of information in the history of mankind is taking place. To enlighten us, we sat down with Megha Rajagopalan who is a world correspondent for BuzzFeed News and Yuan Yang who is Financial Times´s Beijing correspondent. In this discussion we explore: The structure of Chinese online censorship and surveillance, in terms of scope and purpose. How the Chinese Government applies new technologies like facial recognition and AI to ensure conformity in thoughts and action. How the online public is being ‘flooded’ with pro-government propaganda in order to suppress criticism. How Xinjiang province has been turned into a surveillance police state How Western Companies, who enjoy the protection of the rule of law, play a role in the Chinese censorship system How China is exporting its super charged system on censorship beyond its borders, and why even western liberal democracies may not be immune. How the extensive censorship may actually limit the Chinese government´s endeavors to control and monitor its citizens. Why there may still be grounds for optimism Megha Rajagopalan is a world correspondent for BuzzFeed News and is based in the Middle East. She is the former China bureau chief for BuzzFeed and political correspondent for Reuters in Beijing. Her work has also appeared in The New York Times, The Wall Street Journal, TIME, WIRED, and other publications. Yuan Yang is a Beijing correspondent for the Financial Times and writes about China’s technology. Before that, she wrote about development economics as a Marjorie Deane intern for the Economist in London. She is the co-founder of Rethinking Economics, a charity that seeks to make economics teaching more relevant to the 21st century. Why have kings, emperors, and governments killed and imprisoned people to shut them up? And why have countless people risked death and imprisonment to express their beliefs? Jacob Mchangama guides you through the history of free speech from the trial of Socrates to the Great Firewall. You can subscribe and listen to Clear and Present Danger on Apple Podcasts, Google Play, YouTube, TuneIn, and Stitcher, or download episodes directly from SoundCloud. Stay up to date with Clear and Present Danger on the show’s Facebook and Twitter pages, or visit the podcast’s website at freespeechhistory.com. Email us feedback at freespeechhistory@gmail.com.. . .