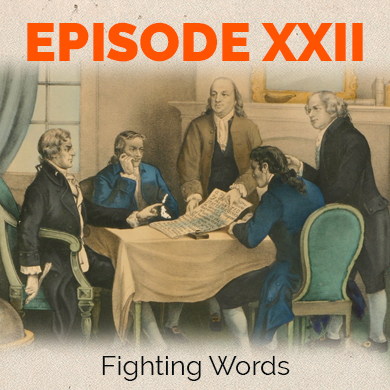 In the second half of the 18th Century American, Patriots showed that freedom of the press was a potent weapon against authority. Not even the world´s most formidable empire could stop them from speaking truth, lies and insults to power. In 1765 the announcement of the Stamp Act kicked off a tsunami of dissent in colonial pamphlets, newspapers, taverns and town meetings. The outpouring of protest shaped a public opinion increasingly hostile to taxation without representation and in favor of popular sovereignty. Additional taxes and disabilities imposed by Parliament further radicalized the patriot side and the anti-British propaganda. The revolutionary dissent included both principled arguments, pamphlet wars, slander, and some genuine “Fake News”. Since prosecutions for seditious libel had effectively been abolished by the Zenger case in 1735 (see episode 21) the British were powerless to stop the onslaught of Patriot fighting words. More than ever press freedom had become the “Great Bulwark of Liberty”. Though Patriots constantly invoked the principle of freedom of speech, loyalist printers and newspapers were subjected to the “Patriot´s Veto” through intimidation and mob violence. Tom Paine´s pamphlet Common Sense became a sensation and pushed many Patriot fence-sitters into the independence camp. And just before and after the adoption of the Declaration of Independence, several states protected freedom of the press in rights declarations. In this episode we’ll explore: How a mix of ideas from classical antiquity and the European Enlightenment inspired the Founding generation How the democratization of access to print technology created a vibrant public sphere in colonial America How pamphlet wars were the 18th century equivalent of Twitter feuds How the Boston Gazette became the centerpiece of #theresistance and the launch pad for fighting words directed at the British and loyalists How symbolic speech such as liberty trees, liberty poles and cartoons rallied popular opinion How the Green Dragon Tavern in Boston became the “Headquarters of the Revolution” How newspapers used “fake news” and analog “photoshopping” to further the Patriot cause How loyalist printers were silenced through intimidation and mob violence with the tacit consent of prominent patriots like Tom Paine and James Madison How Tom Paine´s Common Sense steeled Patriots’ resolve and made the case for independence How the ideas of freedom of the press and speech were included in rights declarations of states like Virginia and Pennsylvania in 1776 Why have kings, emperors, and governments killed and imprisoned people to shut them up? And why have countless people risked death and imprisonment to express their beliefs? Jacob Mchangama guides you through the history of free speech from the trial of Socrates to the Great Firewall. You can subscribe and listen to Clear and Present Danger on Apple Podcasts, Google Play, YouTube, TuneIn, and Stitcher, or download episodes directly from SoundCloud. Stay up to date with Clear and Present Danger on the show’s Facebook and Twitter pages, or visit the podcast’s website at freespeechhistory.com. Email us feedback at freespeechhistory@gmail.com.. . .