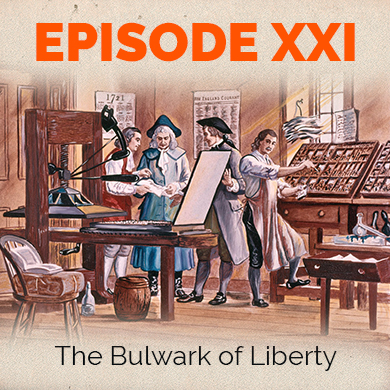 Episode 21 - The Bulwark of Liberty - Free Speech in 18th Century America, Part I

18th century America was impacted and influenced by the so-called Glorious Revolution in the Motherland. And no-one had a bigger impact on American attitudes towards freedom of speech than Cato’s Letters written by the Radical Whigs John Trenchard and Thomas Gordon. Cato´s Letters created a powerful free speech meme, that went viral in the colonies: “Freedom of Speech is the great Bulwark of Liberty”. The reach of Cato’s principles grew exponentially as colonists liked, shared and commented on them in newspapers, pamphlets and taverns. Americans were persuaded that “Without freedom of thought, there can be no such thing as wisdom; and no such thing as publick liberty, without freedom of speech: Which is the right of every man”. As a consequence, grand juries and juries refused to indict and convict colonists for seditious libel when criticizing governments and officials. Despite the practical defeat of libels laws in colonial courts, legislative assemblies continued to threaten free speech. Under legislative privilege provocative writers could be jailed and fined by their own representatives. And even American heroes were sometimes willing to sacrifice principle. In this episode we’ll explore How coffee-houses expanded the public sphere by cultivating the sharing of news and ideas, including revolutionary ones. How the common law crime of seditious libel impacted writers How English writers including Matthew Tindal, John Trenchard and Thomas Gordon paved the way for American ideas on free speech How the editor of the New England Courant in Boston combined anti-vaxxer propaganda with free speech advocacy How the 16-year old Benjamin Franklin used Cato’s Letters to argue for freedom of speech when his brother James was in jail How the New York Weekly Journal became America’s first opposition newspaper and justified its savage hit pieces on New York governor William Cosby with Cato’s free speech principles How a jury acquitted the printer of the New York Weekly Journal Peter Zenger, even though he was guilty according to the law How legislative privilege was used to punish colonialists for offending their own representatives How Benjamin Franklin defended legislative privilege and the jailing of a Pennsylvania man for his writings You can subscribe and listen to Clear and Present Danger on Apple Podcasts, Google Play, YouTube, TuneIn, and Stitcher, or download episodes directly from SoundCloud. Stay up to date with Clear and Present Danger on the show’s Facebook and Twitter pages, or visit the podcast’s website at freespeechhistory.com. Email us feedback at freespeechhistory@gmail.com.. . .