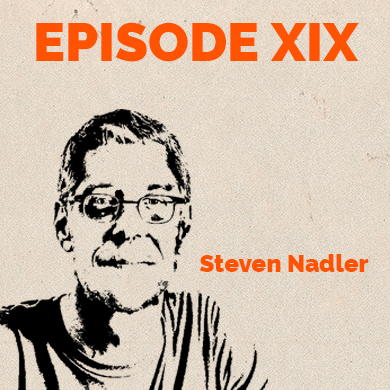 Episode 19 – Expert Opinion: Steven Nadler on Spinoza’s ‘book forged in hell” and the right to “think what you like and say what you think”

Baruch Spinoza (also known as Benedict de Spinoza) was born in Amsterdam in 1632. While his given name means “blessing” in both Hebrew and Latin, Spinoza’s “Theological-political treatise” from 1670 was condemned as “a book forged in hell.” Spinoza himself was denounced as a dangerous heretic or atheist by religious and secular rulers alike, and was pilloried in the court of public opinion. Spinoza’s apparent crime consisted in systematically eroding the foundation of revealed religion and the authority of the Bible. But in addition to his materialist philosophy, Spinoza championed freedom of thought and expression as the precondition for social peace in a free democratic state. According to Spinoza, “The most tyrannical governments are those which make crimes of opinions, for everyone has an inalienable right over his thoughts” and therefore, “In a free state every man may think what he likes, and say what he thinks.” These were radical ideas in early modern Europe and too much to stomach for even the tolerant Dutch. With me on this episode of Clear and Present Danger to explore Spinoza’s ideas on freedom of thought and expression is University of Wisconsin-Madison philosophy professor and Spinoza expert Steven Nadler. Nadler is the author of “Spinoza: A Life” and “A Book Forged in Hell: Spinoza’s Scandalous Treatise and the Birth of the Secular Age.” In the episode we discuss issues including: Why the Dutch Republic was tolerant and liberal compared to most other states at the time Why Spinoza was excommunicated from the Portuguese-Jewish community of Amsterdam Why Spinoza’s ideas of religion shocked and outraged just about everyone Why Spinoza thought social peace depends on freedom of thought and expression Where Spinoza drew the line when it comes to free speech and religion Bonus: Professor Nadler on Spinoza in New York Times: “Spinoza’s Vision of Freedom, and Ours” and “Judging Spinoza.” You can subscribe and listen to Clear and Present Danger on Apple Podcasts, Google Play, YouTube, TuneIn and Stitcher, or download episodes directly from SoundCloud. Stay up to date with Clear and Present Danger on the show’s Facebook and Twitter pages, or visit the podcast’s website at freespeechhistory.com. Email us feedback at freespeechhistory@gmail.com.. . .