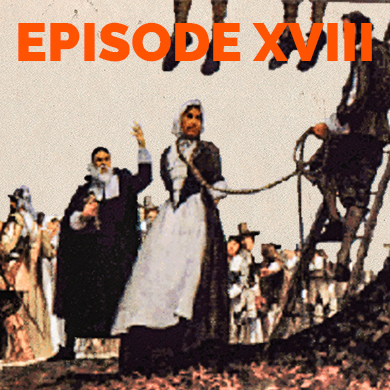 Americans are more supportive of free speech than any other people. 95 % of Americans think it’s “very important” to be able to criticize the government without censorship and 77% support the right to offend religious feelings. But in 17th Century colonial America, criticizing the government, officials or the laws was punishable as seditious libel and could result in the cropping of ears, whippings, boring of the tongue and jail time. Religious speech was also tightly controlled. Blasphemy was punishable by death in several colonies and religious dissenters such as Quakers were viciously persecuted in Puritan New England. Despite the harsh climate of the 17th century, the boundaries of political speech and religious tolerance were significantly expanded. In this episode we’ll explore: How the crime of seditious libel was exported to colonial America Why peddlers of “fake news” were seen as enemies of the state Why a Harvard student was whipped for blasphemy Why four Quakers were hanged in Boston and many more whipped, branded and jailed How colonies like Pennsylvania, Carolina and Maryland combined religious tolerance with laws against religious offense, How Roger Williams´ ”Rogue Island” and West New Jersey adopted polices of radical religious toleration The dangers of mixing alcohol and politics in Maryland How William Penn promoted religious tolerance and political intolerance How the colonies operated a strict licensing regime to suppress printing How John Wise protested taxation without representation and became “America’s First Great Democrat” You can subscribe and listen to Clear and Present Danger on Apple Podcasts, Google Play, YouTube, TuneIn, and Stitcher, or download episodes directly from SoundCloud. Stay up to date with Clear and Present Danger on the show’s Facebook and Twitter pages, or visit the podcast’s website at freespeechhistory.com. Email us feedback at freespeechhistory@gmail.com.. . .