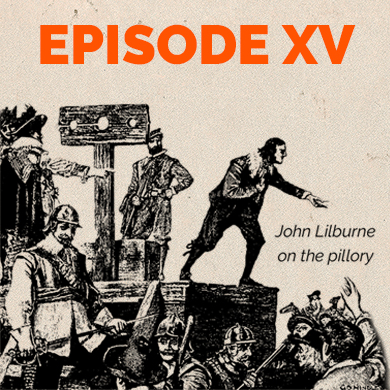 Episode 15 returns to Europe and formative events in 17th Century England, where a mostly forgotten group of radicals demanded a written constitution guaranteeing free speech, liberty of conscience, and democracy. But who were the Levellers? What was the historical context of their radical demands and why were they ultimately crushed by former allies? Listen and find the answers to such questions as: Who was the first English author to demand full religious toleration for both heretics and non-Christians? Why did Charles I and Archbishop Laud cut off the ears of dissenting Puritans? What happens when you try to impose alien religious ceremonies on proud and devout Scots? Why was censorship abolished in 1641 and what were the consequences? What happened at the Putney Debates? How radical were the Levellers’ demands for free speech and liberty of conscience? Did John Milton really become a censor himself? Why did traditionalists refer to pamphlets and books as “paper-bullets?” You can subscribe and listen to Clear and Present Danger on Apple Podcasts, Google Play, YouTube, TuneIn, and Stitcher, or download episodes directly from SoundCloud. Stay up to date with Clear and Present Danger on the show’s Facebook and Twitter pages, or visit the podcast’s website at freespeechhistory.com. Email us feedback at freespeechhistory@gmail.com.. . .