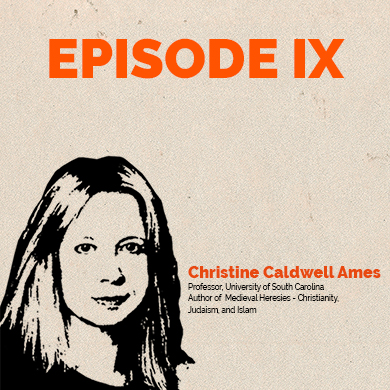 Our last stop in the Middle Ages is an interview with professor Christine Caldwell Ames, who is an expert on medieval heresy and inquisition in Judaism, Christianity, and Islam. The discussion highlights the similarities and differences between Christianity, Catholic and Orthodox, Judaism, and Islam when it comes to defining and policing orthodoxy. Among the topics discussed are: Was the Medieval Inquisition motivated by worldly power or religious zeal? What effect did the Medieval Inquisition have on ordinary people and local communities? Why has the Spanish Inquisition become so infamous? Was Islamic Spain a haven of religious tolerance compared to the Latin West? Are inquisitions a thing of the past or still relevant in the 21st century? And much, much more. Professor Ames is a department chair at the University of South Carolina, as well as the author of “Medieval Heresies: Christianity, Judaism, and Islam” and “Righteous Persecution: Inquisition, Dominicans, and Christianity in the Middle Ages.” Ames has an MA in Church History from Yale Divinity School and a Ph.D. in Medieval History from the University of Notre Dame. You can subscribe and listen to Clear and Present Danger on iTunes, Google Play, YouTube, TuneIn and Stitcher, or download episodes directly from SoundCloud. Stay up to date with Clear and Present Danger on the show’s Facebook and Twitter pages, or visit the podcast’s website at freespeechhistory.com. Email us feedback at freespeechhistory@gmail.com.. . .